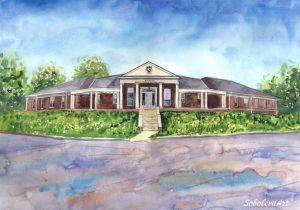 The Hudson House was one of the first homes constructed in the Greek Village. Sitting as the cornerstone to the Greek Village, the house contains twenty six beds, over fifteen rooms, of which eleven are doubles, and four are singles. Some of the house amenities are that it contains a full kitchen, with a stove, microwave and both refrigerator and freezer storage for residents.  With no meal plan required with this on-campus house, members enjoy the freedom of saving money and cooking meals on their own.  Other amenities include three laundry facilities, two large members’ restrooms, one of which serves as an on-site storm shelter,  and a guest restroom. Residents and members of Sigma Nu have full use of the board room, study/library, living room, and a large common room. 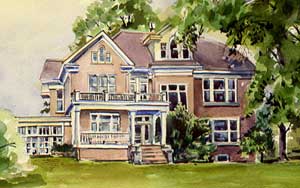 Shivelbine had a capacity of 17 men who reside in eleven rooms in the Mansion. There were five single rooms and six double rooms. Rooms at this Sigma Nu House were quite larger than dorm rooms and other on campus living offered by the University and other Fraternities. The average single room size is larger than doubles offered in the dormitories. Double rooms at the House were also much larger, some averaging twice the size of University dorm rooms.

For being nearly one hundred years old, the house featured central heating and air conditioners throughout the house. A half-court basketball court was added to the north side the property funded by money raised by Sigma Nu members. A regulation-sized sand volleyball court was on the west side of the Mansion.  There was also a computer lab on the top floor.

Features of the Shivelbine Mansion that were unique from average on campus living include an upstairs common area with Big Screen television, a full-size kitchen with a oven, range, refrigerator, full-sized freezer, and dish washer, a laundry room, a dining room area, a lounge area with leather seating and an adjacent solarium, many storage rooms, and a large Chapter room on the top floor running the length of the Mansion. 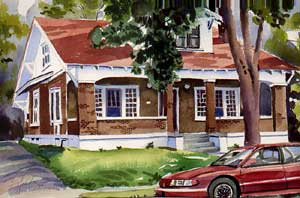 The Themis house was Sigma Nu’s first off-campus house and our second fraternity house.  No sooner were we chartered, than the University notified us that we were to be moving out of J building and that the newly chartered Gamma Phi Beta Sorority would be moving in. With no room on Greek Hill, the brothers banded together and moved into a house in downtown Cape, but a little bit away from campus, 433 Themis.

Thanks to our faculty advisor J.O. Snowden, he set out to spearhead the formation of this Housing Corporation. Recruiting members’ parents and brothers to join him on the board to help the fledgling group. Then April 3rd of 1995, a letter was drafted to a local bank asking for a loan to this housing corporation for the expressed interest of purchasing 433 Themis. Thankfully Brother Rob and Mike Kearns’ father Tom, Brother Christopher Robertson’s father Steve, and Brother Ryan Kasten’s brother Quentin originally sat on the Housing Corporation board and signed off on a loan for this fraternity to purchase its first house.

This was our first official house. It served as our house during our colony period. Currently the home of The Women of Gamma Phi Beta. 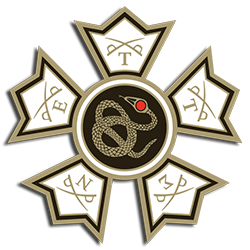 © 2022 Sigma Nu of Southeast Missouri State. Created for free using WordPress and Colibri
Are you interested in Sigma Nu?Let us contact you with more information!